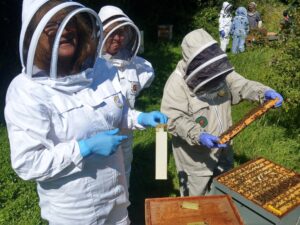 On inspecting the offending hive at the Exeter teaching apiary, the internal flooring was covered with dead or
dying bees; quite a few of the dying bees were shaking/trembling and unable to fly. (We have recorded a
video that can be seen below.)Masses of very sick bees on the floorboard. Picture Martin Myhill.

I collected a scoop full of these bees from the floor at the teaching apiary and then took them home to examine. I
put over fifty live trembling bees in the refrigerator to euthanize them quickly. The remaining ones were frozen. I
now know that the specimens for examination are fresh and not decomposed when looking at them under the
microscope. Most of the bees had bald thoraxes or thoraxes with reduced hair; this could be because some of the
bees are older bees or could be caused by rubbing against each other. A lot of the bees had extended tongues, rather
than folded back when at rest.

Queen Rearing and Bee Paralysis at the Apiary

Queen Rearing. Sadly the Bees have only produced 1 Queen cell in the split. The cold temperatures must have had an effect – the coldest spring for 60 years. We have been watching the food level in the Apiary hives. Some of the 2020 summer mated Queens have needed feeding as they grew very quickly and had to be moved into full size hives. Some, however, were slow to expand so stayed in their Polyhives all winter. The ones in the national hives have been expanding slowly, needing feeding, but the ones in the Polyhives just popped out, making brace comb everywhere and doing really well. Polyhives are warmer than wood hives, could it be this, or did the new Queens in National hives over-expand their brood too soon, lots of Winter Bees to support, not enough stores left to expand in the spring?

Bee Paralysis. Graham, who runs the Microscopy group, walked around the Apiary and noticed a lot of dead bees piled outside hive No.10. This colony had been examined by David Packham and the Beginners a few weeks before and nothing unusual was found, but then bad weather meant they weren’t re-inspected. They were in a National hive and we had added a Queen excluder and a super a few weeks before. We’ve counted the number of varroa on all the floors – also because we collect the floor debris as a Sentinel Apiary for the NBU.

The first thing that Martin noticed was the pile of dead Bees outside and the smell of rotting Bees. The Bees had food and there were a lot covering the frames, but were shaking, slow, lethargic, didn’t fly up or respond to smoke. A lot were shiny and black and K wing was seen. The Queen was found and appeared normal. Unfortunately the floor was covered with shaking and twitching, dying and dead bees. Martin thought it was Chronic Bee Paralysis Virus, so we sent videos to David Packham, our Bee Inspector, and he confirmed it. 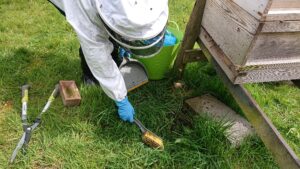 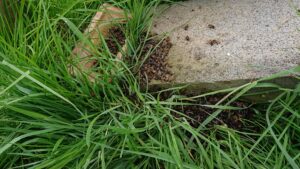 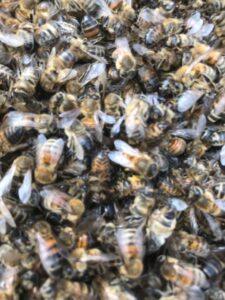 It is not infectious to other colonies as all Bees have the potential to develop it. It’s caused by overcrowding and inability to get out in poor weather. The bees rub against each other, their bristles get pulled out of their abdomen, leaving open wounds, which allows the virus to spread. Hence black shiny Bees.

The main treatment is to give them room. Bee Farmers set up a new hive on the original site with the Queen, take the hive 200M away and shake all the Bees out. Sick ones will die there, healthy ones will fly back. This was not an option for us as the temperature was down to 9C and Bees that were healthy would have had trouble flying back. So we sacrificed the last of our drawn comb to make up a National Brood box, took away the floor covered with Bees and maggots, put the original Brood box with bees and Queen on the clean floor, added the clean drawn comb, removed the Queen excluder and replaced the super. They are getting through their stores rapidly so we also treated them to Candipolline Gold pollen patty – originally intended for Queen rearing.

As a preventative measure we removed all our varroa floors and added a super to all the hives to give them extra room.

Last year’s Covid problems meant that we raised very few Queens in 2020 and used the same Queen as 2019. This year she’s showing her age, she hasn’t come through winter very well, and we’re treating her for a high varroa level.

We have chosen two different Queens for 2021, mother and daughter. Both of these Queens are lovely to handle, they move nicely over the comb, are totally disinterested in you during inspections, so you really don’t need smoke at all. Their gentle temperament means less ‘running’ and so top boxes can be replaced without accidentally squashing bees. They produce a lovely laying pattern, helped by being on relatively clean comb and, with lots of young bees new foundation will be drawn more quickly. They have the added benefit of a low Varroa count. In addition we have selected two other unrelated hives as secondary options.

We started by putting a Brood box on all 4 hives with new foundation and, because it was so cold, we fed with 1:1 syrup – a full 6 litres with sugar kindly collected by John Easton from Morrisons. Subsequent checking showed at least 3 frames of sealed stores in each hive, and with the rapid energy and heat to make wax, the foundation in all 4 hives is now drawn.

Today we have chosen the daughter as she is growing at a nice rate for Queen rearing project. We have discussed the various rearing programmes used in the past and our objectives for 2021. Our bees now are all of a good temperament. In 2019 we used the Jenter system, getting 20 plus queen cells, needed to meet the demand for both the Apiary and Members. This year our objective is 6 for nucs and 4 for Apideas so we are returning to using the Miller method. We have cut a comb into a WW shape at the bottom and placed it the 4th frame from the front of the brood box, where all the action is. We will check next week and hope that it has been laid up with Queen cells. As a backup we have installed a second WW comb in the mother hive. Lots of bees are bringing in plenty of nectar so we won’t feed.

Look at our photo from our last attempt – we will see if we can match it. 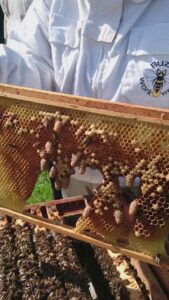 Other hives are varied. We have a couple with plenty of room in Brood for Q to lay, so supers have been added and two almost full. Other hives are bursting with bees, lovely wall to wall Brood, but no room for laying, so they have been given a double brood – at the same time the supers are filling rapidly. We have run out of frames so need more made up if anyone is free to collect? Luckily Jill brought 5 along and saved the day.

First swarm that I know of  – rescued by Andy Mack today in Exmouth.